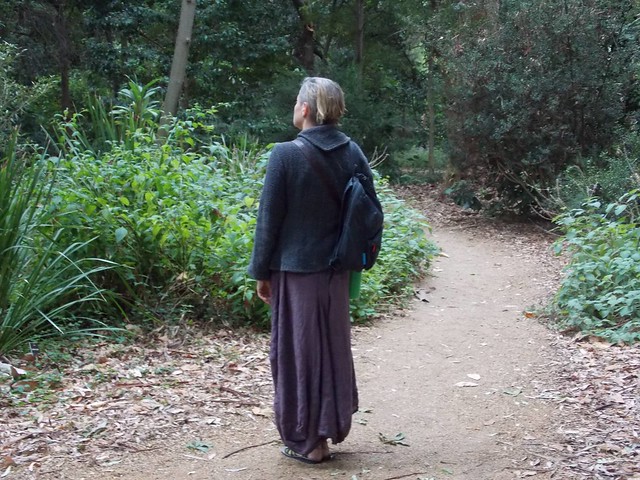 me pondering the beauty of Adelaide’s Botanic Gardens, photo by Steven Abbey.

Given the new digital literacy offerings, I thought it might be useful to publish my CV.

2013 – Practice Based Research in the Arts, Stanford Online.

In 2011 Fee gave up her increasingly respectable career as a creative digital consultant in order to take up a new life as a bus-loving nomadic geek artist. In a reaction against the shift in global politics she set out to discover how someone could disconnect as much as possible from a broken and inhumane sociopolitical system while maintaining meaningful connection to the people and places which enable her own vision of home and self.

Fee’s work explores humanness and the increasing removal of ‘The Commons’ in contemporary life, from common land and open democracy through to open source creative digital commons, and the tensions which exist between them.

In 2012 Fee raised over $27,000 from 343 people via crowdfunding platform Pozible. The campaign went viral after being tweeted by Amanda Palmer, Neil Gaiman and Hugh Jackman. Thanks to all the supporters (financial and otherwise) she now lives in a beautiful big red bus, homeJames. Her public, creative and private life haven’t been the same since.

Her Nomads in Residence (national and international guests) generously share their art and knowledge via roadtrip (want to join in?). All conversations and lessons learned as they make & share art with everyone en route are blogged through http://reallybigroadtrip.com.

2015, March – WOMADelaide, SA – hammocktime invites you to pause, disconnect from technology and reconnect to yourself and your environment while posing three questions to promote social change.

2015, Feb – Nomadic OpenKitchen, Perth – a nomadic version of the social experiment in collectively creating an exchange micro-economy which is based on sharing food, ideas and gifts.

2000-08 the-phone-book Limited – co-founder of UK based arts organisation exploring mobile & emerging technologies as creative platforms and production tools. Created a new genre of literature (the-phone-book.com ultra short stories) and a series of creative projects exploring the power of the technology you carry in your pocket from green-screen to smartphone, through literature, performance & video.

In my professional career I have…